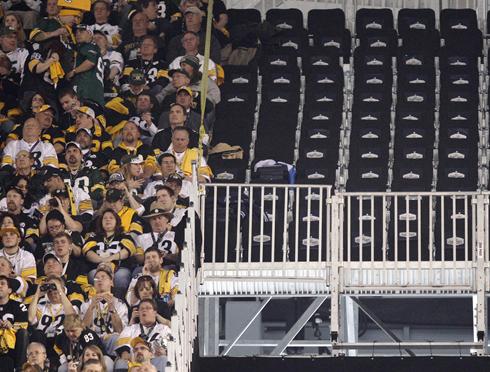 Wait, where are the fans?

When I first heard that there was a class action in the works over last Sunday’s Super Bowl, I hoped that someone had come up with an innovative legal theory to compensate myself and the rest of America for the horrendous half-time show. In reality though, the story is a lot more like a magnified version of National Lampoon’s Vacation: after a cross-country trip, hundreds of fans with valid tickets were denied admission to the game. Of course, rather than punching out the ticket agents, a couple of fans hired California-based lawyer Michael Avenatti to let the league have it, class action style.

The facts of the story go something like this: prior to the game temporary seating was to be installed in certain areas of the stadium in order to maximize the attendance at the game. A large amount of those seats were not finished in time (or not installed correctly at all) and thus could not be inspected by the relevant safety officials. The net result was hundreds of unusable seats. For the fans that were to be seated in that area, one of several fates awaited them: some were given better seats (lucky break), some were given worse (think stools around a video screen with bad audio), and many were literally left out in the cold and never allowed into the stadium.

Thus far the NFL’s attempt to avoid litigation has been less than stupendous: varying reports show the NFL offering affected ticket-holders triple the face value of tickets, or a refund plus a ticket to next year’s Super Bowl, or similar measures. To date, the NFL has not made the obvious settlement offer to fans: a refund of the ticket, plus all travel and accommodation expenses incurred by the affected fans.

Given the NFL’s reluctance to offer up the entire price of the trip for fans, it is unsurprising (yet still awesome) to see that class action litigation has ensued. It is also unsurprising to see that what the suit is asking for is, at a minimum, the costs that fans incurred to (unsuccessfully) come to the game.

What is surprising though, is to see that Jerry Jones — the owner of the host team, the Cowboys — was personally named as a Defendant in the suit. More shocking was that the complaint alleges that the NFL knew about the seating problem for six days prior to the game and still did not see to it that the seats were fixed. Since the NFL admits that to be true, it appears that whether the NFL wins or loses in federal court, its fate is already sealed in the court of public opinion. You just don’t know of a Super Bowl seating problem and not fix it.

Given the seating debacle, litigation, the impending lockout, and high ticket prices, it might be time for the NFL to start looking out for the fans rather than just the organization. That should start with fully compensating the fans denied admission, and then perhaps — just perhaps — the NFL could look into putting together a Super Bowl half-time show that neither bores nor offends most of the country.

One Response to Super Bowl Class Action: Better Than the Commercials