The Worst Troll in the Copyright Kingdom: Pornography, Attorney Sanctions, and Prenda Law

When a judge issues an order demanding your appearance in court to explain why he shouldn’t throw you in jail, you know you’ve had a bad day. When you just add that to your list of required Rule 11 hearings, you know you work for Prenda Law.

For those who haven’t been following the shenanigans of Prenda Law (formally the Anti-Piracy Law Group), it is an infamous copyright trolling firm that specializes in pursuing individual internet users suspected of copying copyrighted pornographic films. Their strategy is fairly simple. Once an IP address has been identified as participating in a BitTorrent peer-to-peer swarm for the copyrighted work, the firm files a “John Doe” suit against the owner of that IP address for copyright infringement. Once in court, Prenda can take advantage of discovery rules allowing it to subpoena the user’s Internet service provider (ISP) to uncover their true identity. Then Prenda sends the user a demand letter offering to settle the matter (without publicly naming the defendant) for a few thousand dollars.

Like most other “troll” firms (particularly in the patent context) the demand letter typically offers to settle for an amount below even the most rudimentary litigation costs, thus attempting to coerce the defendant, likely a person of modest means, to settle rather than fight. Prenda, however, adds a new twist: Failure to settle means that Prenda will reveal to your friends and family that you’re downloading pornography on the Internet, presumably including the title of the copyrighted “work.”

Prenda is fast earning a reputation as far more ethically challenged than most copyright trolls:

1. A Minnesota man has come forward, alleging that his identity had been stolen and used to set up two shell companies, to whom many of the copyrights at issue in Prenda’s suits were assigned.

2. Prenda has filed several defamation lawsuits against anti-troll bloggers (and even commenters) who have been critical of Prenda’s tactics. Shockingly, they’ve also demanded a list of every visitor to two popular troll-fighting blogs, DieTrollDie and Fight Copyright Trolls (warning, by following those links, you may end up on the spreadsheet!)

3. Prenda’s alleged mastermind, Paul Hansmeier, may have set a new record for most evasive witness, for managing to reveal virtually no useful information in a seven-hour deposition.

This past Monday, Prenda’s attorneys, the ISP’s that had turned over subscriber information, and the real Alan Cooper were all in attendance at a hearing in federal court in Los Angeles in response to a “show cause” order issued by Judge Otis Wright. Judge Wright’s order accused Prenda of four separate ethical violations. First, it accused Prenda’s attorneys of violating Rule 11 by failing to investigate the copyright infringement alleged in Prenda’s complaints, since they only presented evidence that a certain IP at a certain moment in time was part of a BitTorrent swarm, and not that the download was complete. Further, the order accused them of a failure to investigate the identities of the alleged infringers, since a member of the ISP’s subscriber’s household, or even a third party, could be the true infringer. It also accused Prenda of failure to comply with a discovery order that stayed discovery. Verizon, one of the ISP’s in attendance, claimed it was never notified of the stay, and produced subscriber information. Finally, the order alleged a fraud on the court regarding the true identity of Alan Cooper. 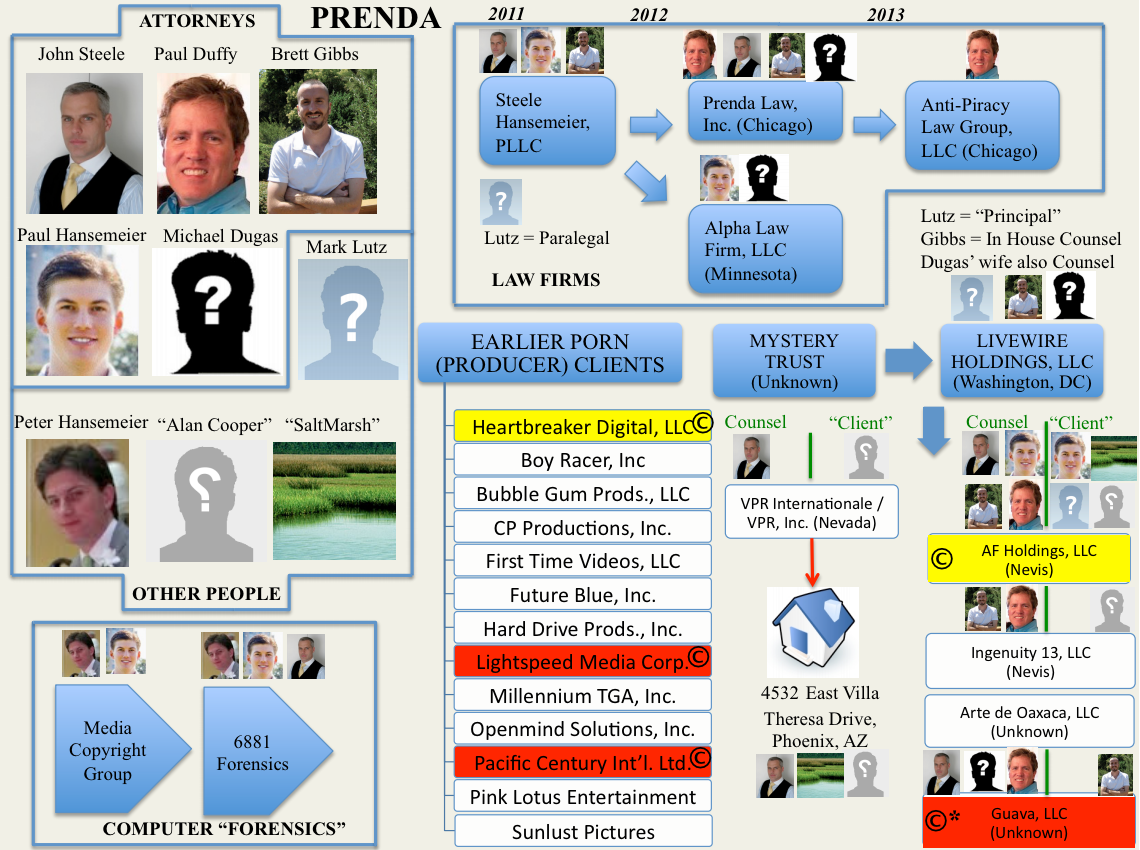 While the alleged actions of Prenda Law may be an egregious example of overzealous copyright enforcement, they highlight a relatively recent crossover of “trolling” tactics from the patent context to the copyright context. Prenda’s overall strategy of pursuing end users (rather than distributors of the work), and then offering to settle for the nuisance value of the suit closely tracks the strategy many patent trolls have used in the past. For example, Innovatio IP has been suing coffee shops and hotels using WiFi, which it claims infringes one of their patents, to offer wireless hotspots–then offering to settle for anywhere between $2,300 and $5,000.

While copyright trolling is not particularly new, most of the negative attention to copyright litigation has been given to industry groups (primarily industry trade associations) asserting their rights in an effort to stem the tide of P2P piracy. One wonders, however, if the precedent of suing individual end users (in some cases, for thousands of dollars in statutory damages) may further embolden new enterprising copyright troll firms. Hopefully, for the benefit of us all, they won’t resort to the extreme tactics of Prenda Law, but reform may be necessary in light of the ease with which works can be copied, ISP records can identify infringers, and statutory damages that can break the bank. Perhaps we should also find a way to keep copyright holders from adding pornographic pseudo-blackmail to the list of their tools.

2 Responses to The Worst Troll in the Copyright Kingdom: Pornography, Attorney Sanctions, and Prenda Law